Three Sundays in a Week 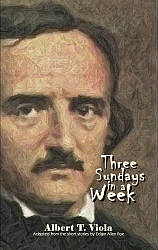 One year after Edgar Poe’s birth in 1809, his father abandoned the family, and then Poe’s mother died the following year. Poe went to live with the Allans, who lived in Richmond, VA, and he was given the name Edgar Allan Poe, though he was never adopted by the family. Poe married his 13-year-old cousin, Virginia Clemm, in 1835, and it is thought that her death from tuberculosis just two years later inspired much of Poe’s writing. The publication of Poe’s poem “The Raven” (1845) made him an instant success, but he always suffered from financial problems during his lifetime. Though Poe is best known for his Gothic horror tales like “The Tell-Tale Heart” (1843), he also wrote many humorous tales, particularly satires that poke fun at societal conventions and the popular pseudo-sciences of the time including phrenology, which is based on the idea that a person’s character can be determined from the lumps on his head and from the shape of his skull. In 1849, Poe was found wandering the streets of Baltimore and was taken to the hospital, where he died at the age of 40.