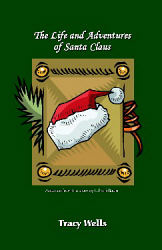 Children’s book author L. Frank Baum was born in Chittenango, NY, and grew up on his family’s large estate. Baum loved Christmas and was known for dressing as Santa Claus for his family. The Life and Adventures of Santa Claus was published in 1902, and Baum published a sequel in 1904 entitled, “A Kidnapped Santa Claus.” Santa, Ryls, and Knooks appear again in Baum’s novel The Road to Oz in which the Wizard of Oz makes giant soap bubbles to carry them back to the Laughing Valley. Baum’s best known work is his children’s novel, The Wonderful Wizard of Oz, which is the basis for his 1902 musical The Wizard of Oz and the 1939 film adaptation featuring Judy Garland. Baum wrote 55 novels, 83 short stories, and 200 poems before he died of a stroke in 1919. He spoke these final words to his wife before he died: “Now we can cross the Shifting Sands.” This is a reference to the magical dessert that surrounds the Land of Oz, which causes anyone who sets foot onto the sand to turn into sand, thus cutting Oz off from the rest of the world.