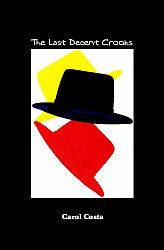 MUSICAL. Winner, Robert J. Pickering Award for Playwriting Excellence, 1987. It’s 1933 and the music is hot and lively at Big Al’s, a Chicago funeral home, which serves as a front for an illegal speakeasy. Here, the coffins are more likely to contain the inebriated rather than the deceased, and mob boss, Albertina (aka “Big Al”), is rolling in dough selling illegal whiskey to her faithful customers. But the good times soon end for Big Al when a rival mob boss is found dead and mobster Rats Branigan sets his sights on taking over the speakeasy for his illegal gambling operation. Then to make matters worse, Big Al discovers her daughter is secretly engaged to a cop—of all people!— and her right-hand man is in love with a runaway nun. But nothing has prepared Big Al for the biggest surprise of all—the end of Prohibition! This delightful musical features eight original songs, a strong ensemble cast, hilarious one-liners, and a genuine mystery for the audience to solve if they can stop laughing long enough to catch the clues.

Carol Costa is an award-winning playwright whose plays have been produced in New York City, Los Angeles, and regional theaters across the country. Originally from Chicago, she now resides in Tucson, AZ.


Ken Eberhart is an accomplished singer and composer. Educated at the University of Arizona, he now lives in Bellingham, WA.