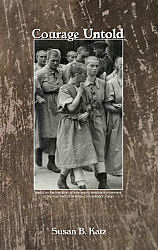 Courage Untold depicts the role female prisoners played in a prisoner revolt at Auschwitz II-Birkenau in 1944. It is based on Susan B. Katz’s careful research and the oral testimonies of more than 20 Holocaust survivors in Chicago, Israel, and Canada. Katz was inspired to write this play after she read a single paragraph in the book, "The Auschwitz Album," which mentioned Roza Robota, a Jewish woman who led a small group of female prisoners at Auschwitz in a plot to blow up a crematorium. Determined to find out more about Robota and the uprising, Katz traveled to Jerusalem in 1985 to interview Erich Kulka, a Czechoslovakian-born Jewish historian, and other Auschwitz survivors. After her interviews in Jerusalem, Katz learned that the sister of Estusia Wajcblum, a member of the uprising who had been caught and hanged, was alive and residing in Canada. Katz then traveled to Canada, where she interviewed Hanka Heilman, who was 14 years old at the time of the revolt. With her help, Katz was finally able to piece together the events of the lost history of the prisoners’ uprising in 1944.