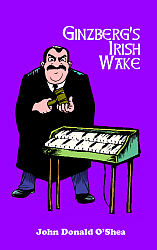 COMEDY WITH MUSIC. Bereaved widow Mary O’Malley hires David Cohen to play Irish music at her husband’s wake, but when David arrives and doesn’t know any Irish songs, Mary refuses to pay him. Enraged, David sues the widow and the two appear in small claims court ready to battle it out. In order to prove his case, David brings along a piano to perform Irish songs for the judge. When the judge falls asleep during an Irish lullaby and then jumps to his feet to dance an Irish jig, David feels confident that he will win. Unintimidated, Mary defends herself by calling forth Father Shamus Rory Mulligan as her expert witness. Twists and turns abound in this hilarious play, which features five traditional Irish songs.