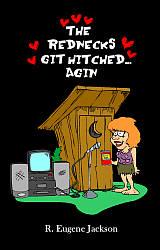 FARCE. When Bubba Man runs out of money and bets his wife Bubba Gal in a karaoke sangin’ contest, he loses her to Billy John Jimmy Joe, who is so ugly the sheriff thinks he’s a swamp devil. Even though Billy John Jimmy Joe bathes with swamp water and sprays Raid under his arms to kill “them little wiggly critters under thar,” Bubba Gal divorces Billy John Jimmy Joe by noon and sets out to get engaged and re-hitched to Bubba Man by nightfall. But Bubba Gal and Bubba Man’s weddin’ plans are soon derailed when Gramps accidentally shoots out the tires of a passing RV, and the Moneybags, a family of rich snobs, find themselves stranded at the Bubbas’ Skum Lake Trailer Camp. Then to make matters worse, Gramps unleashes Marryin’ Mama, who marries everyone in the trailer camp in a redneck shotgun weddin’. Bubba Man finds himself married to Bubba Gal’s goofy-lookin’, snaggly toothed cousin Noreen. Bubba Gal is married to Cleetis, who is so fat he had to cut a large hole in his bib overalls to make room for his belly. And then when the men folk run out, Marryin’ Mama marries snobby Evelyn Moneybags to Bubba Gal’s redneck cousin Maureen. But even if Bubba Man and Bubba Gal can get rid of their new spouses, they have to answer some big questions afore they can git married agin like “What’s so special ‘bout teeth?”; “Should you wash yer stinky feet afore a weddin’?”; and “Should you wait till yer married afore yew launch into a marital spat?” For more hilarious Redneck adventures, check out “The Rednecks Bite Back” and “The Rednecks Un-do Christmas.”