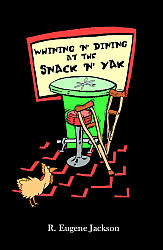 COMEDY. Mr. Crisper has left Zooey in charge of his diner while he is out of town at an enchilada convention. Zooey soon realizes that keeping the Snack ‘n’ Yak running smoothly isn’t so easy. Not only does she have to deal with a waitress who thinks everyone is stealing her tips and a cook obsessed with watching “Oprah,” but she soon discovers there’s no food in the kitchen. Then a host of unruly customers arrive including a lady who keeps smuggling live chickens into the diner, a pair of accident-prone grannies, a man who claims a spoon leapt into his throat while he was dining, and a mob of tourists who storm the café and make a mad rush for the bathrooms.