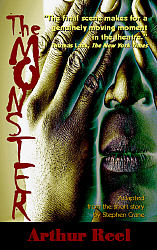 DRAMA. After courageously saving a white boy from a fire, a horribly burned African-American man, Henry Johnson, is forced to wear a hood to hide his face from his fellow townspeople, who view him as a monster. Instead of being heralded for his bravery, Henry finds himself the target of violence as the town’s collective fear turns to hysteria. Only the town’s doctor stands firm against a mob that seeks to confront that which they fear most—the monster within. Adapted from the short story by Stephen Crane.