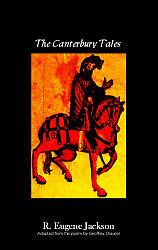 CLASSIC COMEDY. This family-friendly adaptation of Geoffrey Chaucer’s The Canterbury Tales contains five of his most famous tales, additional roles for females, and all the hilarity that made the original tales classics. A group of pilgrims on their way to Canterbury stop off at the Tabard Inn and partake in a storytelling contest. The Miller starts off the contest by telling the story of how a gullible carpenter is duped into thinking a great flood is coming. The Nun tells the fable of how a proud rooster falls victim to flattery. The Pardoner humorously goes on to tell the story of how three revelers foolishly set out to kill Death. Next, the Wife of Bath, who has been married five times, tells the tale of how a knight discovers what all women want most. Finally, the Reeve ends the riotous night of storytelling with his tale about a thieving miller who tries to cheat a young couple and winds up getting his just desserts. Easy to stage with minimal props, this play offers two possible endings including one that allows the audience to vote for the winning storyteller. (Includes “The Miller’s Tale,” “The Nun’s Priest’s Tale,” “The Pardoner’s Tale,” “The Wife of Bath’s Tale,” and “The Reeve’s Tale.”)