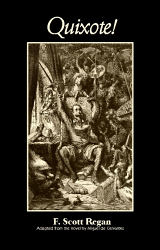 CLASSIC. This streamlined version of Don Quixote is easy to produce and features nonstop laughs and endless opportunities to showcase physical comedy. Having gone mad from reading too many romantic novels about chivalrous knights, Don Quixote sets off on a grand adventure as a wandering knight in order to restore the age of chivalry by winning honor and glory for his imaginary lady love, Dulcinea del Toboso. Though there haven’t been knights in Spain for more than 400 years, Quixote begins his knight’s quest accompanied by his “squire,” an illiterate servant named Sancho, and an old swaybacked horse. Along the way, Quixote stumbles across a windmill, which he thinks is an evil giant and bravely “defeats” it with his lance. Quixote then encounters a barber and mistakes his shaving basin for the mythical Golden Helmet of Mambrino. Weary and hungry, Quixote and Sancho arrive at an inn, where Quixote confuses the innkeeper for a king and demands that the innkeeper properly knight him!

F. Scott Regan has adapted numerous stories for theater and directed plays for children, youth, and adults for the Treehouse Troupe and the Horizon Youth Theatre. He is an Emeritus Professor of Theatre at Bowling Green State University and has held several positions in the American Association for Theatre and Education.