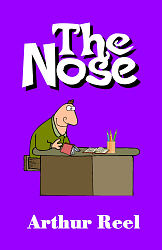 SATIRE/FARCE. In this adaptation of Nikolai Gogol’s classic short story (1832), Alexey Kovalyov, a mid-level government bureaucrat, awakens one morning horrified to discover that his nose has run off. Kovalyov wanders the streets searching for his lost nose when, by chance, he spots his nose riding in a coach dressed as a high-ranking government official. Not only has Kovalyov lost his nose, but now his nose outranks him! Determined to get his nose back, Kovalyov trails the nose to a cathedral. There, Kovalyov confronts his nose, demanding that it return to his face immediately. But the nose rudely rebuffs him and escapes. Meanwhile, the runaway nose has become fodder for the town’s rumor mill, which threatens to destroy Kovalyov’s reputation. This adaptation preserves Gogol’s whimsical and humorous writing style and pokes fun at the incompetence of bureaucrats and the superficial nature of society’s “respectable” classes.