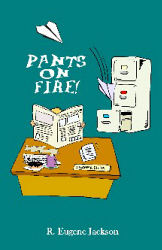 COMEDY/MYSTERY. The “Beacon of Fire” newspaper is hanging by a thread, the reporters may be out of work soon, and the last editor jumped out the window. The newspaper’s downward spiral began when the publisher hired Larra, a lazy reporter, who thinks no news is good news and is adept at driving away any editor hired. With no work to do, the staff perfects the art of “working at not working” by making paper airplanes, doing their nails, sitting on the edge of their desks looking like they’re deep in thought, taking long lunch breaks, and drinking coffee. To save the newspaper, the publisher pulls out all the stops to find editors, including a former marine, a woman who thinks she’s a queen, a hippie who carries a baseball bat, and a teenage computer genius. But these new editors prove no match for Larra, who gets rid of every one of them handily. However, the tables turn when the publisher names Larra as editor, and she realizes she can’t fire herself!