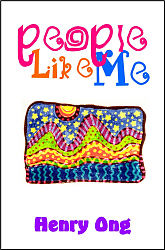 MONOLOGUE COLLECTION. Winner of the Drama-Logue Award for Writing. This collection of monologues is based on interviews with gay and lesbian teenagers who participated in a series of writing workshops sponsored by the City of Los Angeles’ Cultural Affairs Department. These poignant and at times humorous monologues chronicle the lives of teens and the challenges they face as they struggle with issues of identity and acceptance. After honing his “gay-dar” skills, Roger begins to suspect that his mother is a lesbian because she listens to Melissa Etheridge music and likes the movie Basic Instinct. Bernie’s parents think that her desire to date girls is some sort of “lesbian phase” that she is going through, and Dave, a homeless teen, describes what life is like living on the streets.

Henry Ong is a veteran playwright, whose plays have been produced nationally and internationally. He has been awarded eight grants from the City of Los Angeles Cultural Affairs Department for his work in the arts. He is a member of the Dramatists Guild, the Alliance of Los Angeles Playwrights, and an Artistic Associate of Playwrights’ Arena. He lives in Los Angeles.