Diaries of Adam and Eve, The 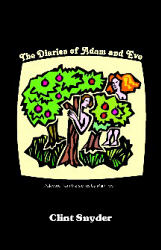 CLASSIC/SATIRE. Adapted from Mark Twain’s comical short stories “Eve’s Diary” and “Extracts from Adam’s Diary.” In this hilarious retelling of the story of Adam and Eve, the new couple finds that domestic life in Eden is less than idyllic. Adam thinks Eve is an annoying creature who talks too much, cries too much, and eats too many berries. Eve believes Adam may be related to chickens because his legs are so thin, and she thinks he’s horrible at naming things in Eden. After all, Adam wanted to name Eve “Bimbo” and call dogs “tax returns” and lions “pickled eggs.” Realizing he would rather kill himself than listen to Eve’s endless prattle, Adam has taken up going over Niagara Falls in a barrel and repeatedly hitting himself in the head with signs only to discover to his dismay that he can’t die. Then to make matters worse, Adam finds out there is a new person in Eden…a baby named Cain. Eve tells Adam he is the father, but Adam adamantly denies it and determines Cain to be some sort of fish or a parasite. Then Eve demands that the couple live together and that Adam build a bigger shelter and participate in family picnics. And to celebrate moving in together, Eve gives Adam a present…a baked apple pie!

Clint Snyder has worked as a playwright, actor, director, and clown on and off the stage. He is a graduate with high honors from the University of Maine with degrees in Mass Communication and Theatre. A Chicago native, Mr. Snyder lives in Maine.