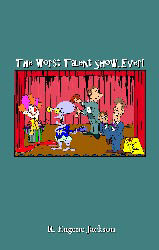 COMEDY. After a lengthy stay in rehab for her marshmallow addiction, Persi is trying to make a comeback as the emcee of a new TV talent show, “Shooting for the Stars.” The lineup includes a “singing” alien, a wrestler who wrestles himself, the Wheelbarrow Dancin’ Guys, a yodeler, a guy with a lampshade on his head, and many others. In the end, the heckler may be the most entertaining part of this show, which should be called, “Shooting at the Stars”! This hysterical, fast-paced play allows directors the option of adding their own “talent” to the show.