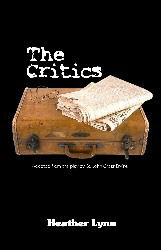 COMEDY. Adapted from the play by St. John Greer Ervine. A local newspaper reporter, who usually covers city council but is filling in for the drama critic, arrives on the opening night of a new foreign play. In the lobby, he meets three other theatre critics. One critic couldn’t understand what the play was about but noticed there was a ghost onstage, a mad person, and some “bad” language. A second critic thinks the play is about leprechauns or fairies, a young fellow who lost his dad, and a girl who sings silly songs. A third critic thinks the play is corrupting the minds and souls of the American people and wants to get the local school board members to censor the play like they do library books. Before leaving the theater, the critics see on the program and that the title of the play is The Tragedy of Hamlet written by a guy named “Shakespeare,” who they think must be some sort of foreigner―most likely a Canadian or Mexican. This witty, satirical play features a strong ensemble cast.