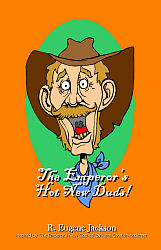 FARCE. Inspired by “The Emperor’s New Clothes” by Hans Christian Andersen. After taking all the townfolks’ money, and even the shirts off their backs, the mayor (aka “The Emperor”) of Cactus Patch needs yet another set of fancy duds. Two rodeo entertainers claim they can make the Emperor and Empress new clothes in just one night. When the “tailors” present the new “clothes” to the Emperor and Empress, they claim the fabric is invisible to anyone who is stupid. The Emperor and Empress pretend that they can see the clothing and proudly don their new “duds.” When the townsfolk see the Emperor parading down the street in his undershorts and the Empress in her slip, they are shocked but go along. After all, they don’t want to look stupid!