Limerickle: A Fantastical Voyage to Imaginary Lands and Their Wondrous Creatures! 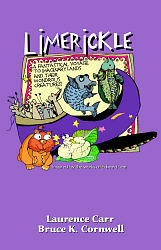 FANTASY/FARCE. On a dull day, Violet and her brothers, Lionel and Slingsby, decide to build a boat and take a trip around the world. Violet invites her cat, and Lionel and Slingsby take along a Quangle-Wangle. At sea, the seafarers encounter the monstrous boat-eating Seeze-Pyder, who leaves them stranded on an island. There, the adventurers meet the Yonghy-Bonghy-Bò, the island’s “gardening manicurist” who keeps the plants happy by telling them bad jokes. Following some large footprints, a meek creature appears holding a hat over his large, luminous nose and informs the travelers that they are inside a daydream. To escape the daydream, the travelers seek out Lady Jingly Jones, who tells the travelers that they must get lost and then be found by the Akond of Swat. As the adventurers try to get lost, they meet rude, red-eyed mice; ballet-dancing fish; a cooperative cauliflower; and dancing pelicans. Audiences of all ages will love this play’s whimsical characters and imaginative, frolicking folly. Inspired by “The Story of Four Little Children Who Went Round the World” and the poetry of Edward Lear. Incorporates some of Edward Lear’s limericks and several of his songs/poems including, “The Owl and the Pussy-Cat,” “The Akond of Swat,” “The Quangle-Wangle’s Hat,” and “The Courtship of the Yonghy-Bonghy-Bò.” If desired, music for “The Pelicans” and “The Yonghy-Bonghy-Bò” may be incorporated.

Laurence Carr is an award-winning author and educator. More than 20 of his plays have been produced nationally and internationally. Mr. Carr has taught creative and dramatic writing at SUNY New Paltz for more than 20 years and resides in Highland, NY.


Bruce K. Cornwell is the pastor of the Community Reformed Church of Colonie and the artistic director of Jeremiah Productions, which produces plays with theological themes. Mr. Cornwell also served as the Producing Director at the Walden Theatre.