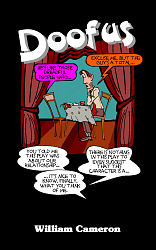 COMEDY. Winner, Best Play and Best Production, Pittsburg New Works Festival, 2000. Dana has written a play inspired by her relationship with her fiancé, Cliff. At the final dress rehearsal, Cliff watches the play for the first time and is horrified to discover that his character “Clint” is portrayed as a total...doofus! Angry and humiliated, Cliff confronts Dana, who claims the character isn’t “entirely” based on him. However, the actor playing “Clint” insists the character is truly a complete doofus. Then, to add insult to injury, the actor playing Dana’s character dismisses Cliff’s protestations and declares him unable to face the truth about himself and clearly someone with no understanding of the restorative powers of theatre. Distraught, Cliff storms off and some spicy cast secrets are revealed. Audiences will love this sidesplitting, award-winning comedy! Easy to stage.

Award-winning playwright William Cameron is Professor Emeritus of Theatre and Communication Arts at Washington & Jefferson College in Pennsylvania. Mr. Cameron has performed with the Pittsburgh Public Theatre, the Philadelphia Drama Guild, and has appeared in the films Lorenzo’s Oil, Hoffa, The Dark Half, and the 1990 remake of Night of the Living Dead. He lives in Washington, PA, with his wife, artist and actress Susan Martinelli.