Return of the Wicked Queen, The 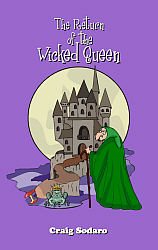 COMEDY. In this sequel to “Snow White” it’s 20 years later, and the Magic Mirror reveals that the Wicked Queen is still alive but is powerless without her book of spells. Getting on in years, the villainously vain Wicked Queen needs a little more than horseradish and Botox treatments to restore her looks, so she kidnaps King Charming and demands that Snow White return the book of spells or she will turn King Charming into a toad. Snow White knows that if she turns over the book of spells, the Wicked Queen will unleash her evil powers on the kingdom of Ever After. Caught between a toad and a hard place, Snow White consults Cinderella, who encourages her to seek the help of the seven dwarves, but only Sassy and Grouchy arrive because the other dwarves are at a mining convention in Vegas. When a toad is delivered to the castle, Snow White thinks it’s King Charming, but the others are unconvinced. After all, sometimes a toad is just a toad! A hoppin’ hilarious Ever After extravaganza!

Chicago-born playwright Craig Sodaro has published more than 100 plays, some of which have been performed internationally. Mr. Sodaro studied playwriting at Marquette University and worked as a teacher for 33 years. He now writes plays full-time and lives in the Colorado Rockies with his wife Sue.