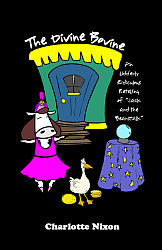 COMEDY. Betsy, the cow from “Jack and the Beanstalk,” hijacks the original story and tells an “udderly” ridiculous version in which she is the star. In it, Jack’s mother, a shopaholic drama queen, sends Jack to the market to sell Betsy, but Jack trades Betsy for three magic beans, which grow into a giant beanstalk. Jack climbs the beanstalk and encounters a short “giant” who mistakes Jack for a delivery guy and gives him some gold coins. After hiring a butler and going on another shopping spree, Jack’s mother is broke again, so Jack brings her some golden eggs from a goose that tells bad jokes. But Mother’s shopaholic ways finally catch up with her when the repo man arrives. Afraid Mother will end up in a debtors’ prison, Jack steals a golden harp, knowing it’s only a matter a time before the real Giant will come looking for his missing gold. Meanwhile, Betsy’s new owner has created a traveling show that stars Betsy as a bovine fortuneteller, and only Betsy, “The Divine Bovine,” can fix this mess! Audiences will love this bovine bonanza!